A Brief Review of the Evidence Against “Kaynbred”

Awhile back I posted a review of the evidence that the Sandy Hook shooter was in fact the individual behind the profile named “Smiggles” that was active on a Columbine forum from early 2010 to February 2012. This is going to be roughly the same idea, focusing this time on the profile “Kaynbred,” a name which was used on a number of different websites for a period of one year – between April 2009 and April 2010 – most notably on a clan forum for the FPS game “Combat Arms” and on Wikipedia.

First of all, the case of the Kaynbred account is significantly different from Smiggles, in that the Connecticut State Police did successfully identify the Kaynbred account during the course of their investigation, and documented it to some degree in their official report. This wasn’t a “miss” on their part, in other words, though it’s unclear how much of this online footprint they actually recovered before they wrapped up the investigation.

It should also be noted that the official report  confirms that the shooter played “Combat Arms”, in the 47-page summary version’s footnotes:

So it’s pretty clear how the police reached the conclusion that Kaynbred was the shooter’s profile, based on this information. For all the shortcomings in the CSP report concerning to the shooter’s online activities, I’d say the Connecticut investigators did a fine job of busting Kaynbred. I also have a few things to add that support their conclusion (as with Smiggles, I have found nothing of substance that contradicts the conclusion that Kaynbred was the shooter.)

The Combat Arms clan that Kaynbred was a member of hosted a web forum, where Kaynbred posted several times. Recently I was going through archives of this forum and found a few posts that I had only found blank versions of previously, since the shooter had a habit of deleting the text of his forum posts sometime after posting them; it turns out these had actually been archived twice, the first time when the content of the post was still online.

The first was a thread started by Kaynbred, titled “Staying Alive.” It’s about the Bee Gees song and can be found here:

The gist of the thread is that Kaynbred was expressing surprise that the Bee Gees were men, given the sound of their voice. He then shares his very narrow taste in music, consisting entirely of “Flogging Molly” and “The Dickies”:

Almost three years later, when the Connecticut State Police were searching the Sandy Hook shooter’s bedroom, they snapped a photo of his closet, where a stack of CDs is visible:

From the top, that is:

Another useful mg14c thread is from November 18 2009 and is entitled “Host a Asian Week.” It can be found here:

In this thread, Kaynbred writes (with apparently intentional spelling & grammar errors) that “I want to be Hiroo Onada. I think Lubang is a pretty cool guy. eh holds out for decaeds and doesnt afraid of anything.”

Hiroo Onada was a Japanese Army intelligence officer from World War II, who famously held out on the Philippine island of Lubang until 1974 (see his wikipedia article.)

The following is a partial list of books seized from the shooter’s bedroom. Note the title “No Surrender: My Thirty-Year War.” 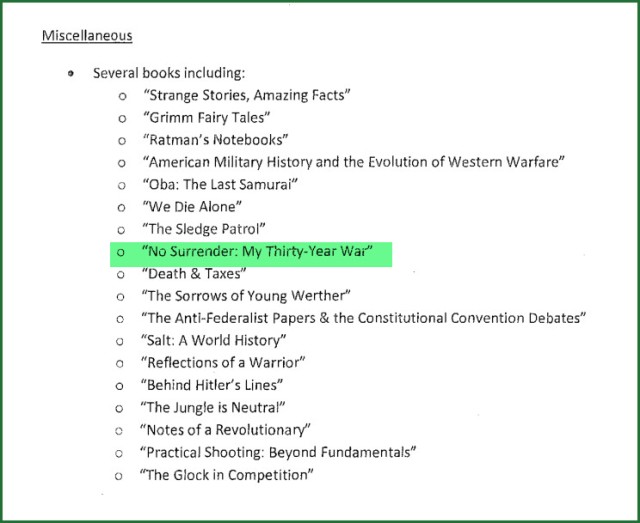 I don’t think this book is visible in any scene photos, but here’s a cover of one of the editions: 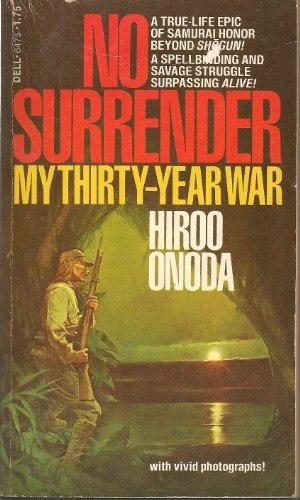 …it’s the autobiography of Hiroo Onoda.

In another post from the mg14c forum, from February 2010, other users are talking about Kaynbred and one mentions that he had said he “wantied to be in the military.”

The shooter’s hopes to be an Army Ranger, or some other kind of elite soldier, was a plan that lasted up until right about his 18th birthday in April 2010, and has been covered pretty extensively (see The New Yorker’s interview with the shooter’s father here) so I’ll just share a glimpse of what is presumably the “military uniform” that the police found in his closet (you can just barely make out the gold-starred epaulet on the shoulder, this is a still from the “Scene Search” video):

Kaynbred posted to “The High Road,” a firearms forum, several times between August 2009 and February 2010. In at least three of his posts, he inquires about Connecticut firearms laws:

Note the “ct.gov” suffix on the link here:

In this one, he openly states that he lives in Connecticut:

On the forum Glocktalk, Kaynbred didn’t post about firearms (at least in the surviving posts,) but instead focused on computers. One thread, entitled “What are the specs of your home desktop?,” Kaynbred shared what they said was the specs for their computer:

This is the same brand and memory capacity as the drive found in the shooter’s computer room:

This would also be the well-known unreadable drive that the shooter damaged at some point prior to the Sandy Hook shooting:

Also, note that Kaynbred’s PC case is a “Cooler Master RC-690.” A few feet away from the damaged drive, there is the shooter’s PC case:

The model is not specified in the report, but it’s a Cooler Master RC-690, the exact same model. For comparison, an image search will return examples like this:

There are several instances where Kaynbred made edits to Wikipedia articles associated with mass shooters. Rather than review all of it again, I’ll just focus on one, the “Collier Township” shooter George Sodini. The first appearance of the Kaynbred account happened when Kaynbred logged in to Wikipedia and documented that he was accessing Sodini’s website in the days after that mass shooting (the text in the blue box on the right):

Files from Sodini’s website, in turn, were found on the Sandy Hook shooter’s USB drive:

A final note of interest is that a clip from the film “Bloody Wednesday” was also found on the same drive. This corresponds neatly with the shooter’s Smiggles post from July 2010, when he described stumbling across the film when looking for video of the Sodini shooting “a year ago”:

There are several other instances where “Smiggles” posted the same info on a mass shooter that he had edited as Kaynbred on Wikipedia, usually just tweaking the weapons used, but you get the idea: “Kaynbred,” like “Smiggles,” was in fact the Sandy Hook shooter.

1 Response to A Brief Review of the Evidence Against “Kaynbred”